Spruch des Tages – Motto of the day
When one is going to lead an entirely new life one requires regular and wholesome meals. – Oscar Wilde

and almost nobody will miss her. British PMs are going to change in the same sequence as governments in Italy. But just spare me BoJo, the undead ghost of Westminster.

I think a new election would grant that people have their say about a future government in the UK.

Not all Russians are brainwashed and repeat the propaganda phrases of mainstream media again and again.
Watch what Zhanna Agalakova , former journalist for the Russian state TV Channel One, says on BBC.

If there were a courageous and determined person in the entourage of Putin it would save thousands of lives. Russian lives too.
Давай!

The election for the new German Bundestag is over. The outcome as far as the next government is concerned is still unclear. What however is clear is the end of Angela Merkel’s ruling. (I skip certain possibilities when the establishing of the future government will last very long.)

In fact she reigned over 16 years and many things about her government were remarkable:
• After the Fukushima event in 2011, she was ready to rethink and reorganize not less than the whole energy politics of our country. Driven by her scientific background she was willing to renounce on nuclear energy in comparable few years. This could be considered as the start of a green-black project.
• In 2015 she promoted to accept about 1 million refugees in Germany. The advantage of this human gesture was the help that this huge number of people got. The disadvantage of this was how this extraordinary deed was communicated. Many people especially when living in precarious conditions felt neglected. Moreover countries like Hungary, Poland and others were allowed to block nearly any refugee. This stirred up hostily and produced a huge lack of understanding for many Germans. Since then, we have this royal pain in the ass in our country called AfD
• Moreover she had a very pragmatic view on politics missing almost any vanity most men are famous for.
• The main advantage of Mrs Merkel’s government however is a new view on women in politics. This effect will remain even if Angela Merkel has left the political scene.

Some aspects of her being chancellor in Germany will fade out like this “alternativlos” word (being without alternative). That’s no loss. Generally speaking – I fear – we will remember her government as the few years of an all in all well-balanced and content greater Bundesrepublik.

After more than 120 days war in Ukraine inflicted on this country by this aggressive pariah state Russia the view on Angela Merkel has changed. It was more than a “weak point” that she didn’t recognize the danger of this Putin figure and his entourage.

*inspired by Alanis Morissette’s “Thank U” 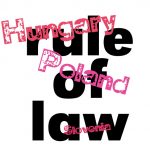