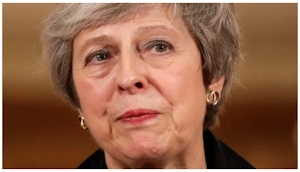 Nearly everyone wonders why Theresa May is doing this real odd job: She hadn’t invoked this unbelievable mess around Brexit, but is now repeating again and again the “strong and stable” or the “we will deliver” mantra of a Brexit to come. Is she that naive to hope that in the very last minute a deus ex machina will offer a solution with a back-stop acceptable to everyone? Or that sufficient members of her Torry party enforced by a few Labour members will back the treaty she gained from EU in parliament?

To me it looks like a most likely head-on collision that may impact European politics for the next twenty years.

A nation of 1,3 billion people is definitely a major player. Therefore news from the 106th Indian Science Congress were adopted with much frowning. As Indian prime minister claimed that many centuries ago hindu scientists invented stem cell research. Another claim concerned 24 different types of aeroplanes that – as Nageshwar Rao, vice chancellor of Andhra University, said – were owned by Indian demon Ravana in former ages.

As we learned by Donald Trump, Nigel Farrage and the likes, now accompanied by Narendra Modi, you only have to have a patient and obedient audience to claim any crap you want. Cheers!